The Singaporean group last year confirmed it would expand from The Lion City into new markets, with Australia first on its radar in the form of a management takeover of the hotel currently operating as The Westin Sydney at 1 Martin Place.

In preparation for moving in, maintenance and cleaning of the building’s exterior structures and faces will be carried out in a multi-stage process leading up to the hotel’s opening in October 2019. Heritage structural engineer Shreeji Consultant has been tasked with overseeing the project, having carried out similar work to other historic Sydney edifices including The Strand Arcade and Queen Victoria Building.

“We don’t actually want the building to look brand new, but we want it to look clean, so finding the right balance is tricky, as is marrying the old and new parts of the building so they work in harmony,” said lead project manager Sumeer Gohil.

The chemical-free cleaning process is expected to take 38,000 working hours and will see highly trained heritage experts use steam, water and old-fashioned scrubbing brushes to remove accumulated dirt without altering the sandstone’s natural patina. A water capture system will prevent contamination to the city’s stormwater system and no disruption to the public below.

Cleaning is expected to be complete in time for the hotel’s opening later this year. Once open, The Fullerton Sydney plans to host dedicated heritage tours to share the history of the building’s hallways and ornamental carvings.

“As custodians of heritage, we believe it’s imperative that significant historical buildings such as the GPO retain their heritage features,” said General Manager of The Fullerton Heritage, Cavaliere Giovanni Viterale.

“At the same time, we want to share the Grand Dame’s unique story with everyone who visits the property—hotel guests and the general public alike.”

Sydney’s GPO was built in two phases of construction, beginning in 1866 under the guidance of colonial architect James Barnet. Despite a public outcry – which stemmed from the realistic faces and stone work depicting ordinary people instead of the more traditional ancient gods and goddesses – upon the building’s completion in 1883, the structure was Sydney’s best-known landmark until the opening of the Sydney Harbour Bridge nearly 50 years later in 1932.

For a look back at the history of Sydney’s GPO, check out the infographic below. 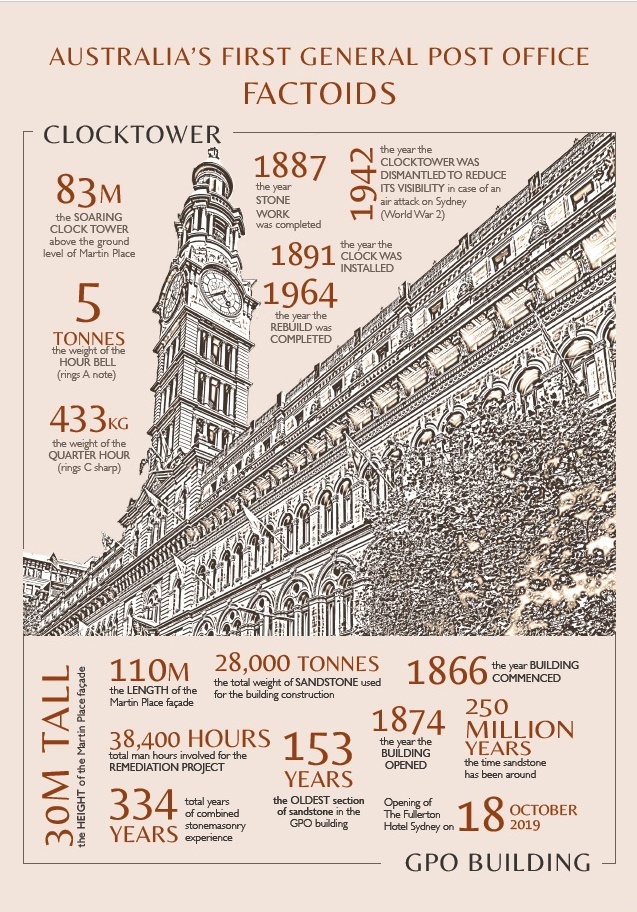