A ground-breaking ceremony has taken place at The Star Gold Coast to mark the start of construction of the resort’s new 53-storey mixed-use tower, which will house The Dorsett and cement the luxury brand’s entry to Australia when it opens in 2022.

In what will be a $400 million development, The Dorsett will become the glitter strip’s third hotel offering more than 300 rooms – 316 to be exact – and will be the third hotel encompassed as part of The Star Gold Coast complex on Broadbeach Island, which also features The Darling (56 rooms) and the flagship Star Grand (596 rooms). In addition to 316 hotel rooms across the lower floors, The Dorsett Gold Coast will also comprise 423 apartment style one and two-bedroom residences higher up, taking the complex’s total room count over the three properties to nearly 1,400 rooms.

More than 2,300 jobs will be created as the new development rises, of which 500 will be ongoing as operational roles once the property opens to guests.

A number of new restaurant and bar offerings are in the works and will be detailed closer to opening. Guests will have exclusive use of a new swimming pool and a recreation deck offering views out over the Pacific Ocean nearby. 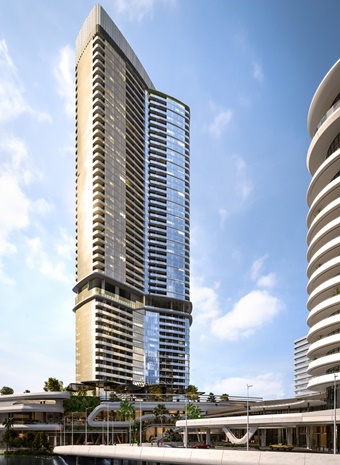 The Star Entertainment Group Chairman John O’Neill was on hand with Queensland Premier Annastacia Palaszczuk for the sod-turning ceremony, saying the Gold Coast’s overall tourism appeal will be greatly enhanced once the new Dorsett hotel opens.

“The Star Gold Coast has been transformed over the past three years, and continues to evolve, with levels of investment that position us as a genuine global tourism destination.

“The introduction of a Dorsett hotel will bring with it increased awareness in the global market, especially in Asia, where Dorsett Hospitality International owns and operates the majority of its 54 hotels,” O’Neill added.

“We see its enormous potential, and we cannot wait to offer a whole new level of sophistication, service, and style to future guests.”