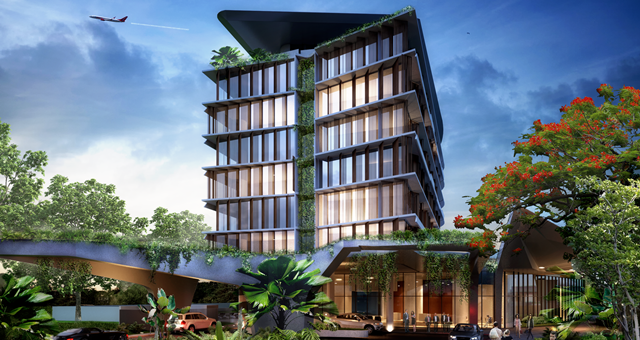 A $50 million Rydges hotel with a rooftop bar and viewing deck will be the jewel in the crown of Gold Coast Airport when complete in 2019.

The four star hotel will include 192 rooms and suites over seven storeys with sweeping views over Kirra beach and across the runway to the hinterland.

As well as its rooftop amenity, the hotel will boast a restaurant, resort-style swimming pool, and substantial function, conference and meeting facilities.

It will be located close to the airport’s major terminal expansion project, with construction of both projects expected to start in the third quarter of next year.

The hotel will be branded under Rydges Hotels and Resorts, an Event Hospitality and Entertainment company.

Gold Coast Airport CEO, Chris Mills, said the hotel would enhance the appeal of the growing airport precinct and add a new level of convenience for passengers.

“This is a game changer not just for the airport, but for the southern Gold Coast,” he said.

“The hotel is an important part of the airport’s broader property strategy and we expect it will stimulate interest in a number of other exciting projects being considered for the precinct.

“The location lends itself to a high quality hotel development – we’re a stone’s throw from some of Australia’s best beaches and in the heart of the southern Gold Coast, which is becoming an increasingly popular travel destination.

“Many of our customers have indicated they would welcome the convenience of an airport hotel to enable them to catch early morning flights after meetings or conferences.” 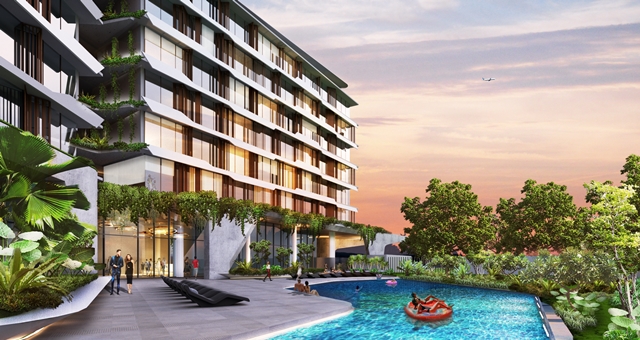 Gold Coast Airport Hotel Managing Director, John Robinson, said he was excited about the development and has complete confidence in its success based on his previous experience.

“I always put my money where my mouth is and am completely comfortable investing $50 million in this project. I have extensive experience in the development and operation of hotels and have been in the industry for the best part of 40 years. I have also developed and operated airport hotels, I have gained a strong sense of what people require in terms of accommodation when travelling, whether it be business or leisure,” he said.

“Everyone is time poor these days and certainty when it comes to travelling, time is crucial. An airport hotel provides comfort to the travelling public that they will be arrive at the terminal in time for their flights.

“I have a longstanding relationship with Rydges Hotels and Resorts and have appointed them as my preferred brand, accordingly the hotel will trade as Rydges Gold Coast Airport.”

Event Hospitality and Entertainment Director of Hotels and Resorts Operations, Norman Arundel, said the company was pleased to be a part of the key development which will continue the growth of the Gold Coast region.

“We’re excited to unveil this amazing airport hotel which will provide travellers with a convenient hotel option within the airport precinct,” he said.

“We pride ourselves as being one of the leading airport hotel operators in Australia and New Zealand, and with Rydges Wellington Airport and Atura Adelaide Airport currently under development, Rydges Gold Coast Airport further strengthens our hotel portfolio.”

“The Gold Coast had almost five million domestic and international overnight visitors, injecting over $4.3 billion into our local economy last year, so this new investment is great news for the Gold Coast,” he said.

“Commencing construction after the Commonwealth Games, the hotel will help facilitate better access for domestic and international visitors wanting to explore the Gold Coast region.”

The hotel will generate 64 jobs during operation, and more than 90 jobs during construction.

Hotel guests will enjoy Rydges Dream Beds and complimentary Wi-Fi. Through Rydges and its Priority Guest Rewards (PGR) loyalty programme, they will have access to over 54 hotels in key destinations across Australia, New Zealand and London in the United Kingdom. PGR members also gain access to the GHA DIscovery loyalty programme that gives recognition and benefits across 35 hotel brands with 550 hotels in 76 countries.