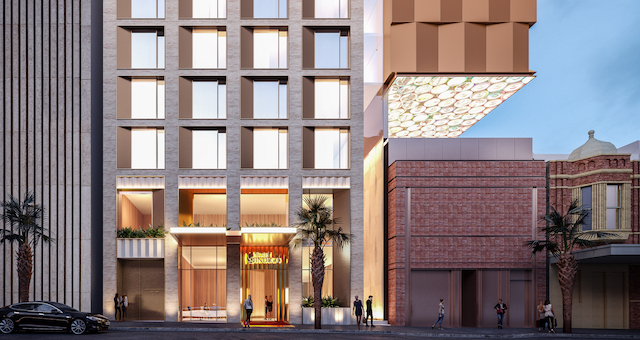 An artist’s impression of the new hotel

A new-build Hotel Indigo is set to open in the heart of Sydney’s CBD in 2021.

Located at Sydney Central, the hotel’s design will draw on the Haymarket neighbourhood’s rich heritage. The cantilevered northern wing will provide a backdrop to its neighbour, the heritage-listed Corporation Building, while a grand artwork will become a distinctive external feature, celebrating the hotel’s location within the entertainment precinct.

Inside, the design will ensure the hotel fits naturally into the neighbourhood, telling stories of the local culture by weaving together rich materials, colour palette and custom pieces from local artists, photographers and furniture makers.

The 168-room hotel will have a restaurant, café and bar that will draw on distinctive local ingredients for their menus, echoing the produce markets that were located in Haymarket from the early 20th century through to the 1980s.  It will also include five suites, rooftop terraces for meetings and events with views over the city, and a gymnasium.

“We expect Hotel Indigo Sydney Central to become one of the city’s leading boutique hotels, making its mark thanks to its unique, eclectic style. It will perfectly complement our existing midscale to luxury IHG assets across this landmark city, building IHG’s scale in Australia’s largest city,” he said.

IHG currently has 47 hotels operating under four brands in Australasia, including InterContinental, Crowne Plaza, Holiday Inn and Holiday Inn Express, with another 17 in the pipeline, including Hotel Indigo Brisbane Fortitude Valley and Hotel Indigo Melbourne Docklands.

View all posts by Emma Castle →